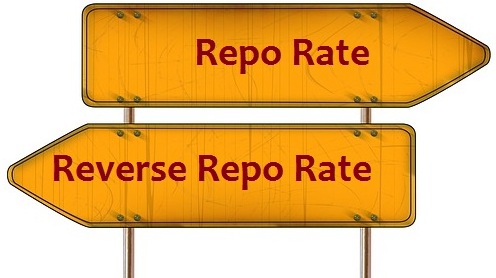 Repo Rate: The term ‘Repo’ stands for ‘Repurchase agreement’. Repo is a form of short-term, collateral-backed borrowing instrument and the interest rate charged for such borrowings is termed as repo rate. In India, the repo rate is the rate at which Reserve Bank of India lends money to commercial banks in India if they face a scarcity of funds. Commercial banks sell government securities and bonds to Reserve Bank of India with an agreement to repurchase the securities and bonds from Reserve Bank of India on a future date at a pre-determined price including interest charges. Current Repo Rate as of October 2019 is 5.15%.

The components of a repo transaction between the RBI and the bank are as follows:

RBI keeps changing according to changing macroeconomic factors. Whenever RBI modifies the rates, it impacts all sectors of the economy; albeit in different ways. Some segments gain as a result of the rate hike while others may suffer losses. RBI recently cut down the repo rate by 25 basis points to 5.75% from 6%. In the same line, the reverse repo rate was also reduced by 25 basis points to 5.5% from 5.75%.